A project I’m involved with has a traditional distributed client-server architecture: multiple servers are interconnected, clients connect to one more servers. In this use-case we’re expecting around four to seven servers with long-running connections between them and approx. a dozen clients with short-lived connections to the server.

Initially I had used plain Java networking but during 2013 I’ve switched over to netty.io as a communication layer. Benefits were more agile networking code, better concurrency, etc. At least in theory.

The implemented algorithm (PBFT, as in BFT might not be well suited for concurrent processing. Incoming messages forward operations (which i might call transactions) between multiple states. In a perfect world every 2 or 3 messages will lead to data change. This implies that I need to lock all internal collections and objects (to prevent race conditions). As each Client should initially have exactly one open Transaction/Operation we’d have a collection with roughly a dozen elements.

The generic architecture would look a bit like this: 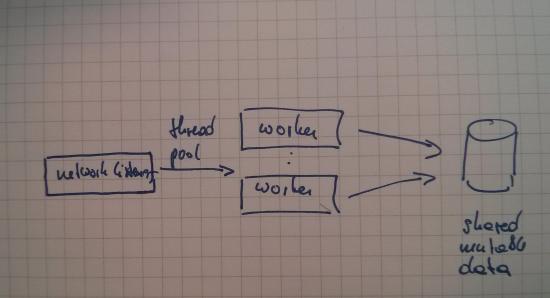 Netty.io uses the reactor-pattern. Incoming messages are de-multiplexed to message handlers. This fits our use-case rather well and is well suited for single-processor scenarios. As we’re targeting multi-core systems this might be sub-optimal. We can always create more worker threads but then access to mutable data must be secured (otherwise we will run into race conditions). Currently I am doing an “interlocked mutex” pattern and would prefer to use a higher-level abstraction.

I am contemplating using the Actor Model through Akka.io. In this computing model actors are the basic unit of computation. They receive messages and act upon then. Our worker threads have a close resemblance to actors. Through using a framework that utilizes this model we should improve our message handling (each actor has a mailbox, which might be persisted) as well as have a good base for creating a fault-tolerant system. But alas, the whole locking and mutable data access problem still persists within the actor.

The core of the problem is the mutable nature of our data. Can I apply some functional programming magic and improve performance this way? Our algorithm uses three collections, a transaction traverses through all those collections. We can reform our worker loop into using only append-only memory:

To prevent infinitely growing collections another worker will remove finished transactions periodically. What does this solve? I fear not much as we still need collection locking for the maintenance worker. At least the code might get easier to read – but then, we’re working in Java so collections are not read-only memories and the whole passing immutable collections-thing kinda implodes.

A colleague mentioned using Software Transactional Memory – on a high-level this looks like using database transaction semantics for in-memory transaction control. Sounds fine in theory, but then with our write-heavy use-case this will realistically degrade our performance (as too many transactions will fail).

So maybe the way forward is to combine the Actor-Pattern with lock-free programming to achieve higher throughput.

Not a very satisfying outcome, suggestions anyone?